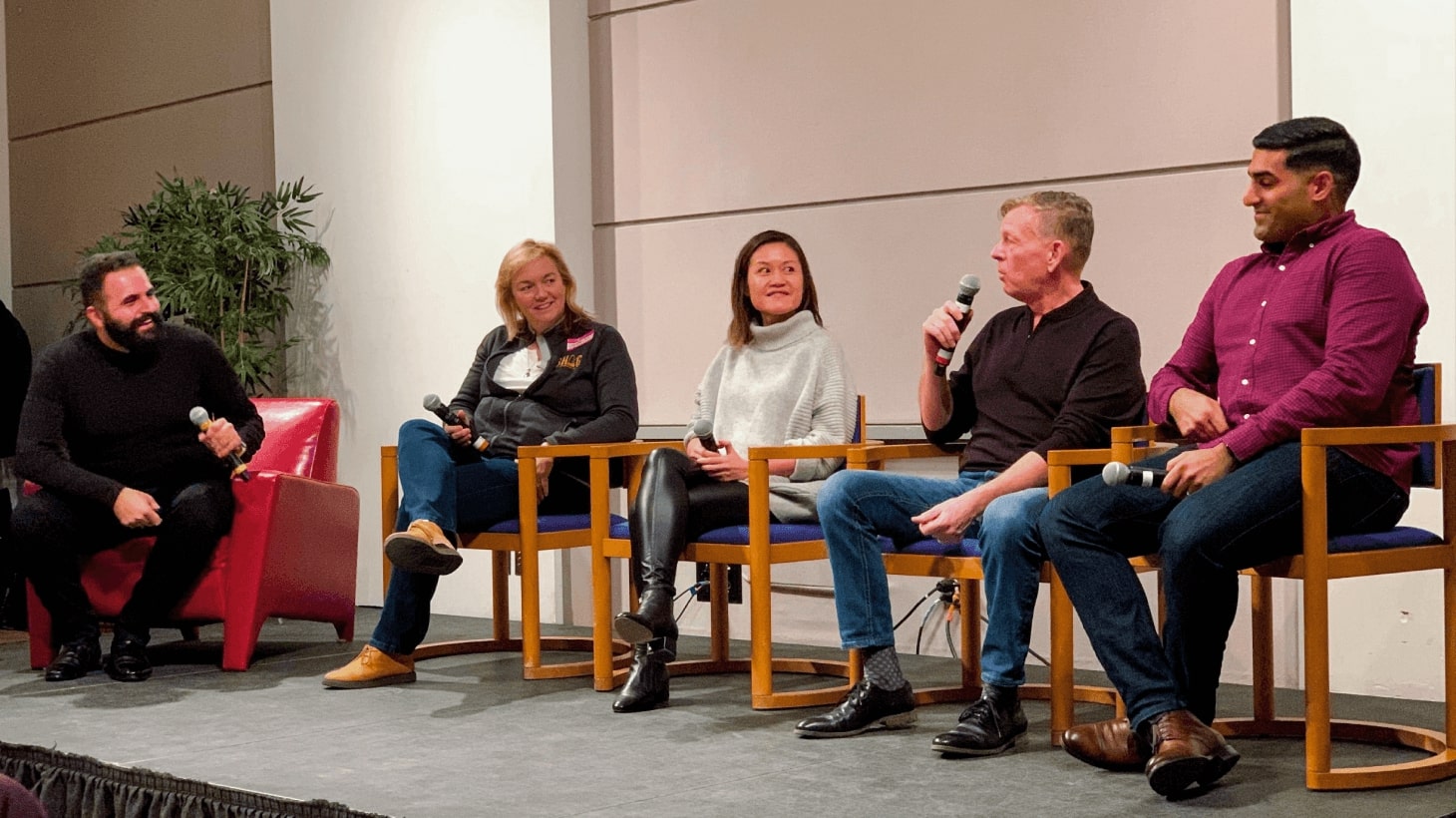 Last week our CEO and Co-Founder Olena attended the OVOU 100th conference for tech entrepreneurs. The panel was made up of several top industry leaders, and well, we took notes. Here are the list of influencers and the lessons they shared.

Catherine Dahl CPA, CMA, Board Member and Treasurer at ACETECH BC 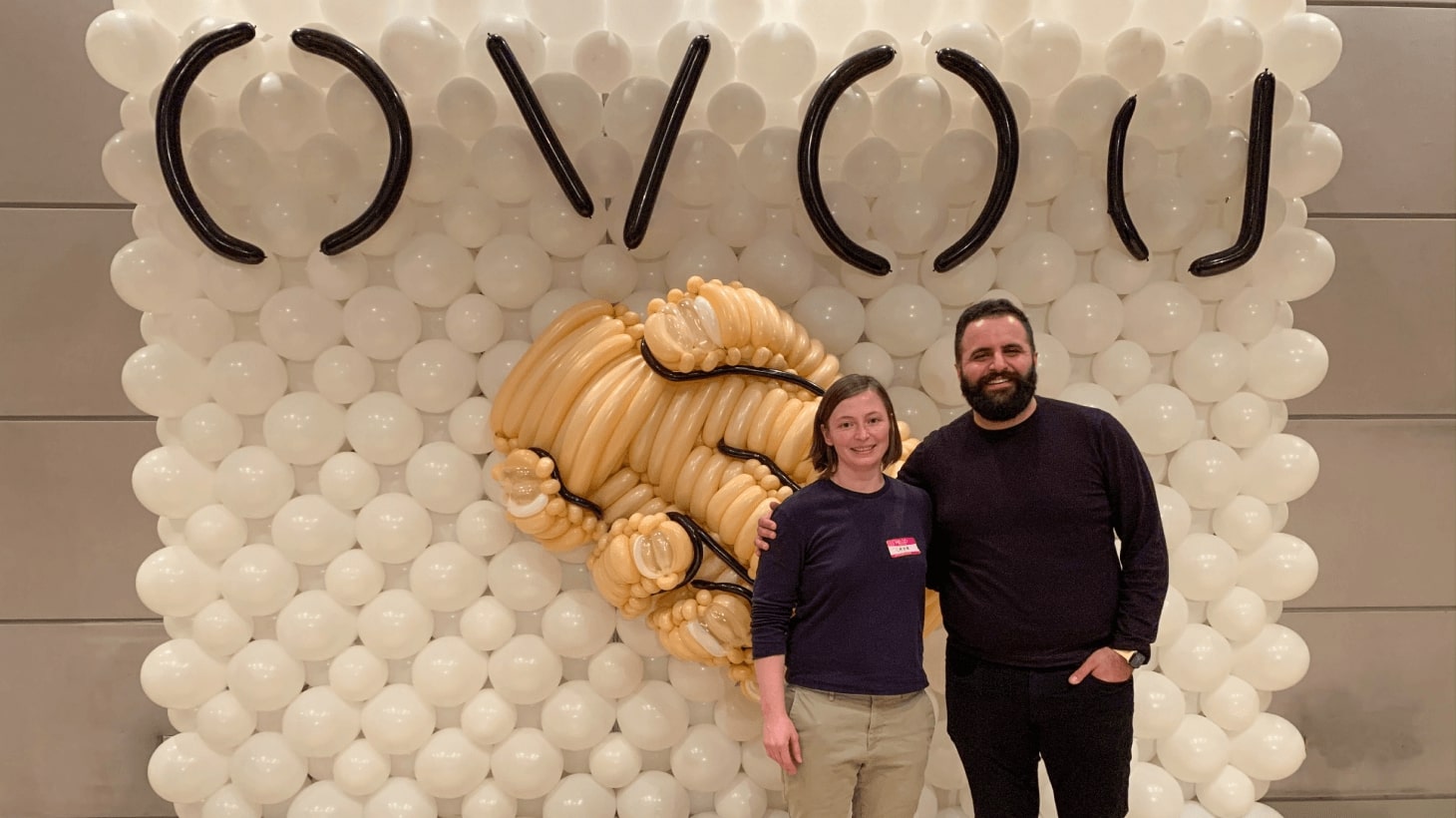 1. The Role of Community and People in Running a Startup

Entrepreneurs have a lot to accomplish and a lot of responsibility, it can sometimes feel like you're an island. But as these experts share, building a supportive network and community is key.

AP: At Tech Vancouver I've learned that your success comes down to people, the people whom you surround yourself with. I truly believe that most of my success came from people helping me, like my father, who helped me as an engineer. As much as we're running a tech startup and it's all technology, it's really all about people, it's the customer on the other side, it's the investor who bought into you, it's the co-founder who decided to join you.

FM: If I meet someone that I think is going to add value to my life, I want to see them again and again. Those are the people who are going to help me get better.

GF: One of the things that I take the most pride in, is when I'm dealing with somebody that I've known for 20 or 30 years, and when I have a network of people that I continue to work with and call on. We make a lot of mistakes over the years, you fail at things, you say dumb things, you get the wrong person or something. Long term relationships, those are the rock that everyone's business gets built on. However, we also need to continue networking because we take from it what we need at that point; whether it's encouragement, whether it's proof of concept, raising capital, finding the investors you need, or whether it's sourcing great team members to join your company.

If I meet someone that I think is going to add value to my life, I want to see them again and again. Those are the people who are going to help me get better.

Now that we know maintaining a community is important, how does one actually go about building strong relationships when you've got so much on the go?

CD: Being a female CEO, I have very limited time. I have work to do all the time and so forth. As such, building relationships, for me, tend to be a small subset of other CEOs, especially female CEOs. I try to make time for friends but it is, it's difficult, I'm not good at that part at all.

AP: I would say I tend to solve problems and I love solving problems.That's how I connect with people, we have these shotted strategic calls. People identify that with me, you know, they somehow notice, that's what I do. I would have coffee and lunch with people and they would tell me, this is my burning problem and we have yet to solve it. And then, for whatever reason, I would think of an outside the box solution. Likewise, when I have a problem I turn to them to discuss it.

GF: I learned a long time ago that asking questions is more important than telling people things. I have many more questions than answers about what I should be doing next. What I want to be able to do is surround myself with people who know more than I do, at least about certain things, or have very valid opinions about things, so that they can tell me what they think I should be doing.

I learned a long time ago that asking questions is more important than telling people things.

3. How do you keep it genuine?

RV: I feel like authenticity speaks loudly. It's crazy, from miles away people can see whether you are being authentic or not. Then it comes with integrity, transparency, as well as a little bit of a vulnerability. I'm very comfortable in my skin, so I'm authentic that way, I can share the whole thing. But a lot of people build this persona around themselves and they get stuck; they have to keep it up, and they can't take the mask off because that way they get judged. 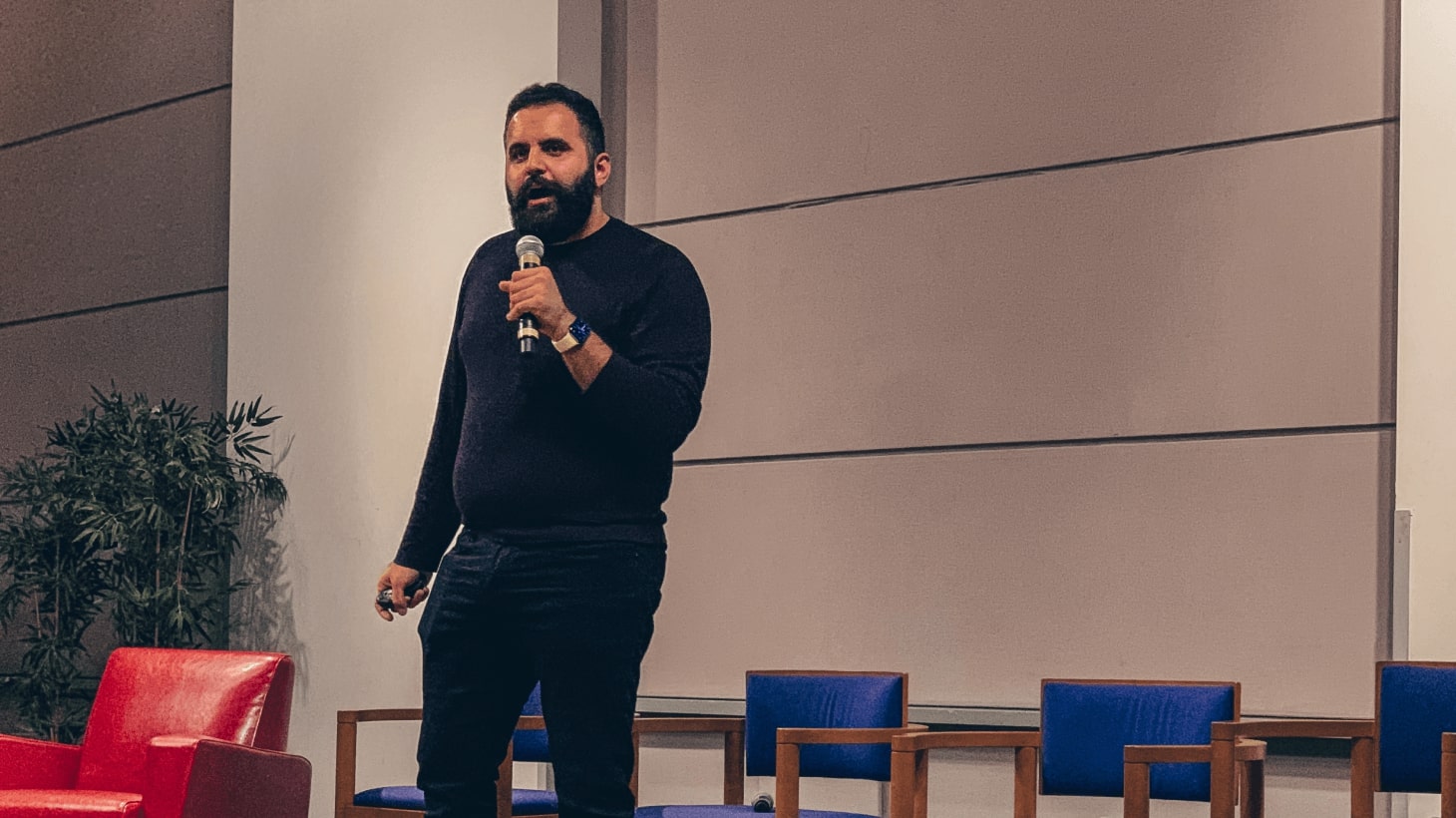 4. How much of success is fate-driven and how much is under our control?

CD: We emphasize the alchemistic moments. When I think about my co-founders, we were all part of another company, and the company closed down one day. It was the people that stuck around on lay-off day that became the co-founders of the next company. We believed in what we were doing and it was kind of accidental, and now they're like family and they're stuck with me forever.

AP: One person that really made a huge difference in my life is my first investor, Boris Wertz. For some reason I knew he was the investor for me, so it didn't matter that I went networking, it didn't matter that I went to 1000 pitch events, I wanted him to be my investor. And he said no to me three times. And I was just trying and trying again, in some ways it bettered my business because he kept telling me the reason why he couldn't fund it. And so I was like, I'll do that, and then I'll come back, and then I'll do the next thing, I'll come back, and so on. One day, I finally broke the wall and he funded me.

GF: I don't believe that fate drives us, I believe that we make our mark. Persistence, stick-to-itiveness and being determined is what causes luck to happen for you. So the right people tend to come along. That happens because you put yourself in the right place, in the right situation to meet those kinds of people. You accomplish the right things, that gets their attention, or you keep badgering them until they say yes. So it's all about you and your momentum.

5. Who is the first person to call in a crisis?

CD: You gotta have a Rolodex in your head, and I do, I go through my head going who's good for that problem - board chair? coach? angel investor? co-founder? husband? best friend? It really just depends on the subject matter.

You’ve got to have a Rolodex in your head and really go through asking who's going to best help you solve that problem - board chair? coach? angel investor? co-founder? husband? best friend? 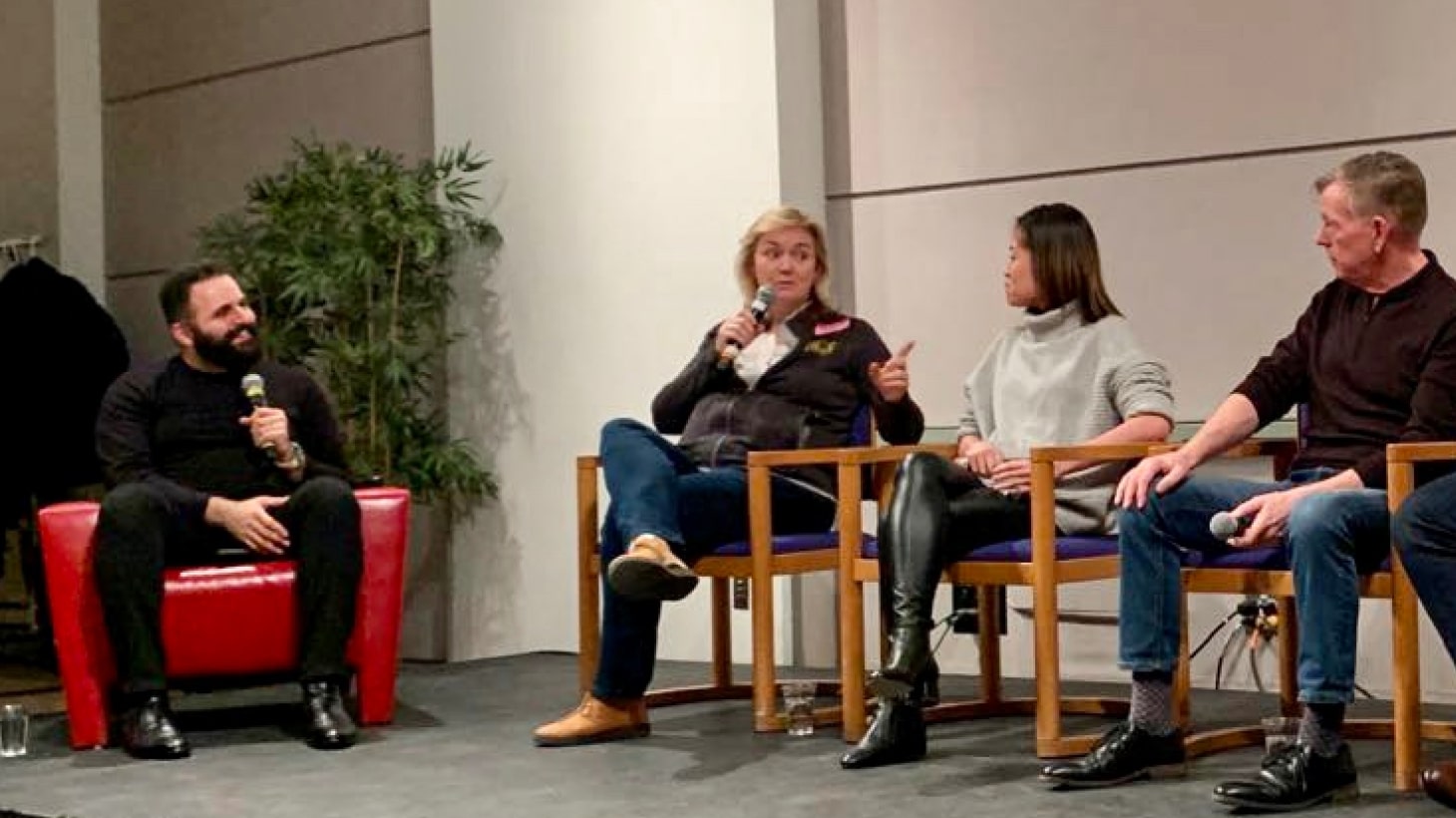 6. What would you have done differently if you started your company knowing what you know now?

GF: I would say it's always been about hiring - taking on the wrong people has caused me more headaches than anything else. And my first partner and I have a rule, that everybody who we hire has to pass the beer test; meaning if we don’t want to go for a beer with them we won’t work well.

AP: There are so many lessons to share. Some of the notable ones are really pick the impactful thing to do. Like as a first time founder you're just doing what's right in front of you, and then you get really busy, but it's not the most impactful thing. So, pick wisely. And then, hiring - huge, people again. Also pay them well.

CD: 1) Start with the end in mind; knowing if you're going to go for acquisition for example, and making sure you thought ahead of time, before you open your doors, who's going to buy your company? Is that going to happen in three years, four years? 2) Metrics, we’re very data-driven nowadays. 3) Get a good lawyer. 4) Never run out of money. 5) Be flexible.

CD: My why has changed over the years. The first "why" was that we believed in the customers, customers loved the product yet the company had collapsed. And I had sort of seen this as the future of accounting and so I knew, professionally speaking. I’m also stubborn, I just have to be right. I was tenacious from that perspective and stubborn so that was the first why. And then the second one was wait a minute, we're actually doing something that's affecting people; we've had stories of accountants whose lives we've really improved, and they're so happy and tell us the story of how stressful their life was trying to get their business back and running; when they had to take their server to the local bank to plug it in to get access their accounting system. And we took away a huge stress on their life by taking it to the cloud for them. And so we hear these stories about how we're impacting our customers, that was my next why.

AP: As an entrepreneur what excites me are the new connections, new learning, and also seeing the results, seeing a solution work out.

GF: What gets me up in the morning every day excited is that I am building a business that I created. I’m executing an idea. And I have all these people who believe in what I'm doing and want to get involved and help me with that business. That's pretty motivating.

Launching your own start-up? Find out what makes Pieoneers the Top App Developer for Start-ups according to Clutch.